Thomas H. Fetzer, of Wilmington, NC, was appointed by the North Carolina General Assembly in 2017 to serve on the Board of Governors of the University of North Carolina System. His term will end in 2021.

Fetzer is vice chair of the Audit, Risk Management, and Compliance Committee and serves as secretary on the University Governance Committee. He brings a wealth of experience to the Board on state government and public policy. He was a vocal proponent of NC Promise - a tuition-reduction program designed to reduce student debt and increase enrollment at three participating UNC System institutions.

Fetzer is a former three-term mayor of Raleigh and past chairman of the North Carolina Republican Party.

He is the Founder and President of Fetzer Strategic Partners, a Raleigh-based firm specializing in government relations, public and media relations, survey research, and crisis management.

The North Carolina Center for Public Policy Research recently ranked Fetzer as the second most effective lobbyist in North Carolina, based on a survey of legislators, the media, and other lobbyists. In 2010, as Chairman of the North Carolina Republican Party, he spearheaded the effort that led to the election of Republican majorities in both Chambers of the North Carolina General Assembly for the first time since 1870. In 1993, Fetzer became the first Republican and youngest mayor in the history of the city of Raleigh. During his tenure, Raleigh was named number one city in America for business by Fortune Magazine and number one city in America to live by Money magazine.

Fetzer is passionate about the value of education and understands that the process of setting public policy sometimes requires robust dialogue and challenging debates - two ingredients, he believes, that are required to improve our educational system and deliver on our promise to provide quality education to students.

After serving as mayor, Fetzer was awarded a teaching fellowship at the John F. Kennedy School of Government at Harvard University.

He was later appointed chief executive of the United States Tennis Association. In that capacity, he was responsible for all programming not related to professional tennis (US Open, Davis Cup, Fed Cup, etc.). While at the UTSA, Fetzer managed a $60 million annual budget that supported tennis programs, hundreds of thousands of volunteers, and touched communities throughout the country.

Fetzer also has worked extensively in the private sector, principally in the area of real estate development.

Fetzer is a recipient of the Order of the Long Leaf Pine, the highest civilian honor a Governor can bestow upon a NC citizen.

A graduate of Wake Forest University, Fetzer resides in Wilmington, NC. He and his wife have five children.

"I've always had an interest in education. I've had some really impactful teachers who dramatically altered the trajectory of my life. My advice to students is to fall in love with learning. It is a life-long experience that doesn't stop. If you embrace it, it can be your constant companion for life." 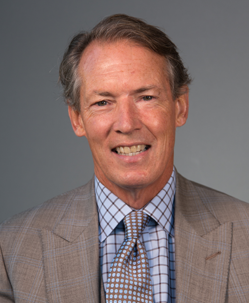