N. Leo Daughtry, of Smithfield, NC, was appointed by the North Carolina General Assembly in 2017 to serve on the Board of Governors of the University of North Carolina System. His term will end in 2025.

Daughtry serves on the University Governance Committee, the Committee on Public Affairs, and as chair of the Military and Veterans Affairs Committee.

Daughtry founded his firm as a sole practitioner in 1969, which thrived and grew into Daughtry, Woodard, Lawrence & Starling. Working with nine attorneys and more than 20 staff members, Daughtry continues to manage complex litigation matters in both criminal and civil cases. In the earlier part of his career, he served as a judge advocate general for the US Air Force.

His commitment to the citizens of North Carolina has been evident in his longtime service in the political and civic arenas. He cherishes time spent in his early career learning how to negotiate and develop good relationships. He is active with Johnston County Schools, the Johnston County Chamber of Commerce, and the Boy Scouts of America. He also sits on the Board of Directors of the Community Foundation and has won several awards for his work, including the Boy Scouts' Man of the Year, the Johnston County Schools' Celebrity of the Year, and the Greater Smithfield-Selma Area Chamber of Commerce Man of the Year. He is a former member of the Board of Trustees for Meredith College.

Daughtry is a graduate of Wake Forest University. He and his wife Helen are active members of St. Paul's Episcopal Church and other civic organizations.

"I have always believed that education is the great equalizer. I encourage students to enjoy the experience of education. Be open and ready to meet new people and share new ideas. This is your time to learn more about yourself." 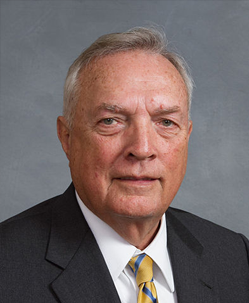