Darrell Allison, of Morrisville, N.C., was appointed by the North Carolina General Assembly in March 2017 to fulfill the remaining term of a vacancy on the Board of Governors of the University of North Carolina System and reappointed in 2019. His term will end in 2023.

Allison previously served on the North Carolina Central University Board of Trustees, where he played key roles on the Advancement and External Affairs, Academic and Student Affairs, Intercollegiate Athletics, and the 12th NCCU Chancellor Search committees. In addition, he held a seat on the Endowment Board.

Allison's dedication to education extends to K-12 administration as well. He currently serves as the national director for State Teams and Political Strategy at the American Federation for Children, a national organization that works around the country to expand parental school choice options for children and families in need. He is also the founding president of Parents for Educational Freedom in North Carolina, which he led from 2005 through February 2018.

His career spans decades of service as an operations and strategic planning executive. Among his accomplishments, Allison is responsible for raising millions of dollars for numerous non-profit organizations, which have benefited communities in all 100 counties in the state. He also launched a million-dollar initiative to support public charter schools in mostly poor and rural districts, spearheading a multimillion-dollar alternative loan partnership program to address public charter school needs in economically distressed areas of North Carolina.

Upon his appointment to the UNC Board of Governors, Allison, a native of Kannapolis, NC, established an NCCU scholarship and endowment bearing both his and his late father's name, which is providing financial support to entering freshmen students from Cabarrus County, NC.

Allison received a juris doctor degree from UNC-Chapel Hill and a bachelor's degree from North Carolina Central University. He is the recipient of the Walton Family Foundation Education Reformers to Watch Award and has been nationally recognized by Partners for Developing Futures as a Diversity Champion for Education Reform. He is married to La Nica and they have two daughters.

"When you consider the UNC System's five-year Strategic Plan, access and affordability are two key goals that stand out for me personally. Nearly 25 years ago, I was that kid from a small textile town whose family couldn't afford to send me or my siblings to college. I want today's UNC System college student to know that, if they are willing to give it their very best to reach and achieve their educational goals, regardless of race, geography or income, they have strong leaders on the UNC Board of Governors who have pledged to work tirelessly to meet them where they are and to work collectively to make our great UNC System the most affordable and most accessible it can possibly be." 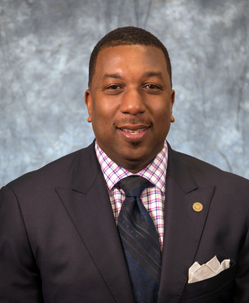