C. Philip Byers, of Forest City, NC, was appointed by the North Carolina General Assembly in 2015 and reappointed in 2019 to serve on the Board of Governors of the University of North Carolina System. His term will end in 2023.

Byers is chair of the Public Affairs Committee, chair of the Subcommittee on Laboratory Schools and secretary of the University Governance Committee. He is passionate about student success, safety on college campuses, and access to education for all citizens in North Carolina.
enforcement field for 20 years, he retired in 2006 as sheriff of Rutherford County, NC.

During his tenure in law enforcement, Byers received acclaim for leading the fight against methamphetamine production in rural western North Carolina and, as a result, testified on three occasions before the US Congress. He was instrumental in crafting state and federal laws governing meth production and lab apprehension. Byers was also part of a Federal Hate Crime Task Force from 1996-1999, which worked with the FBI, ATF, US Attorney, and local law enforcement to dismantle the Ku Klux Klan and other white supremacy organizations. Their investigation led to numerous arrests in North Carolina, South Carolina, Tennessee, Ohio, Indiana, Texas, and Georgia. As a result of the investigation, Byers received performance awards from the US Attorney, FBI, and ATF.

He has a positive outlook on life and credits his law enforcement experience for the work he does today. He enjoys engaging with citizens from all walks of life and providing young people with opportunities to get an education.

Byers holds a bachelor's degree in secondary education from Appalachian State University and a master's of public affairs from Western Carolina University, and he participated in the Law Enforcement Executive Program at North Carolina State University.

"Follow your passion and follow your heart. If you want to become an artist, then become an artist. If you want to earn a PhD from one of the best universities in the UNC System, then go for it. You have to be in love with what you do. I also remind young people that if you treat people well, life will have good things for you. I don't live in a perfect world. There are tragedies and lots of hardships, but if you have passion and a heart, you can deal with those missteps. Then, when success comes your way, remember those who helped you and return the favor to someone less fortunate." 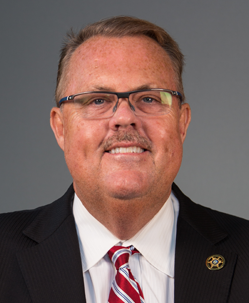