W. Louis Bissette, Jr., of Asheville, NC, was appointed by the North Carolina General Assembly in 2011 and reappointed in 2015 to serve on the University of North Carolina System Board of Governors. His second term ended in 2019. In honor of his many years of service to the Board and the UNC System, he was named Board member emeritus.

Bissette serves on the Personnel and Tenure Committee. He previously served as the chair of the Board of Governors, overseeing the 28-voting member board and supporting the overall progress of its committees and working groups from 2015 - 2018.

He credits his family - all native North Carolinians who have attended UNC System institutions - for his intimate knowledge of and passion for higher education. He proudly proclaimed the UNC System's excellence, referring to it as the best in the country. He believes his role is to make the University even better than it is today. Guaranteeing access to a quality education and safeguarding its affordability are the two goals he believes will improve the lives of North Carolina's young adults.

After finishing law school and business school, Bissette started his career in the banking industry, landing a job at Wachovia Bank and Trust Company before moving on to Western Carolina Bank and Trust Company. His career as a practicing attorney has spanned four decades and has allowed him to gain a wealth of experience in areas of economic development, land use, and zoning. As a practicing attorney with McGuire, Wood & Bissette, P.A., he represents both domestic and foreign corporations that are expanding in the western region of the state and provides legal counsel on mergers and acquisitions, organizational structure, and strategic planning.

He has a wide range of experience in community leadership and public service as well, having served two terms as the mayor of Asheville, president of the Asheville Area Chamber of Commerce, board member at Mission St. Joseph's Health System, and as a lifetime member of the Wake Forest University Board of Trustees. He currently serves on the Asheville-Buncombe Economic Development Coalition, Asheville's Community Betterment Foundation, Carolina Alliance Bank (vice chairman), the Southern Conference Basketball Tournament Asheville (co-chairman), and WCI, Inc. (chairman).

During the span of his career, he has served on more than 40 boards of directors and has received several awards, including the Asheville Area Chamber of Commerce Excellence in Public Service Award (2011).

Bissette received his bachelor's degree from Wake Forest University and his juris doctor from UNC-Chapel Hill School of Law. He also holds an MBA from the University of Virginia.

He and his wife Sara have two sons and five grandchildren.

"I've come to believe over the years that there are a lot of things that can help you become successful. But the one thing that is most important to have, above all, is perseverance. There are going to be many obstacles you will face, and you will have all sorts of problems along the way. However, if you remember to push through it and persevere, you will succeed in whatever path in life you choose." 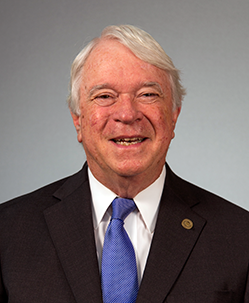