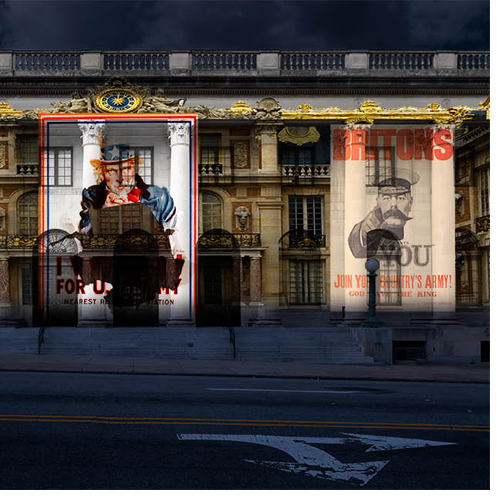 Commemorating its 10th anniversary, the Winston-Salem Light Project (WSLP) returns to its original location, the historic Millennium Center, and calls attention to an even more important anniversary: the end of World War I. Presented by the senior lighting designers in the School of Design and Production at the University of North Carolina School of the Arts, the annual outdoor lighting installation takes place from 8 to 11 p.m. Tuesday through Saturday, April 24-28, at 101 West Fifth St. in downtown Winston-Salem.

Titled “MCX” (M for Millenium Center, C for the 100th anniversary of the end of WWI, and X for 10th anniversary of WSLP), this year’s event will be the most complex light project to date, says founder and executive artistic director Norman Coates, who directs UNCSA’s lighting program. “Student artists will explore universal themes surrounding war, utlilizing up to eight large-format projectors, with images blended and mapped on the building,” he said. “Three-dimensional projections will cover the entire 200-by-40-foot Fifth Street façade of the Millennium Center.”

Lighting designer Ridley Walker from West End, N.C., says the project is more story-driven than in the past, with images and sound that illustrate themes including the home front, the soldier’s experience, propaganda and nationalism.