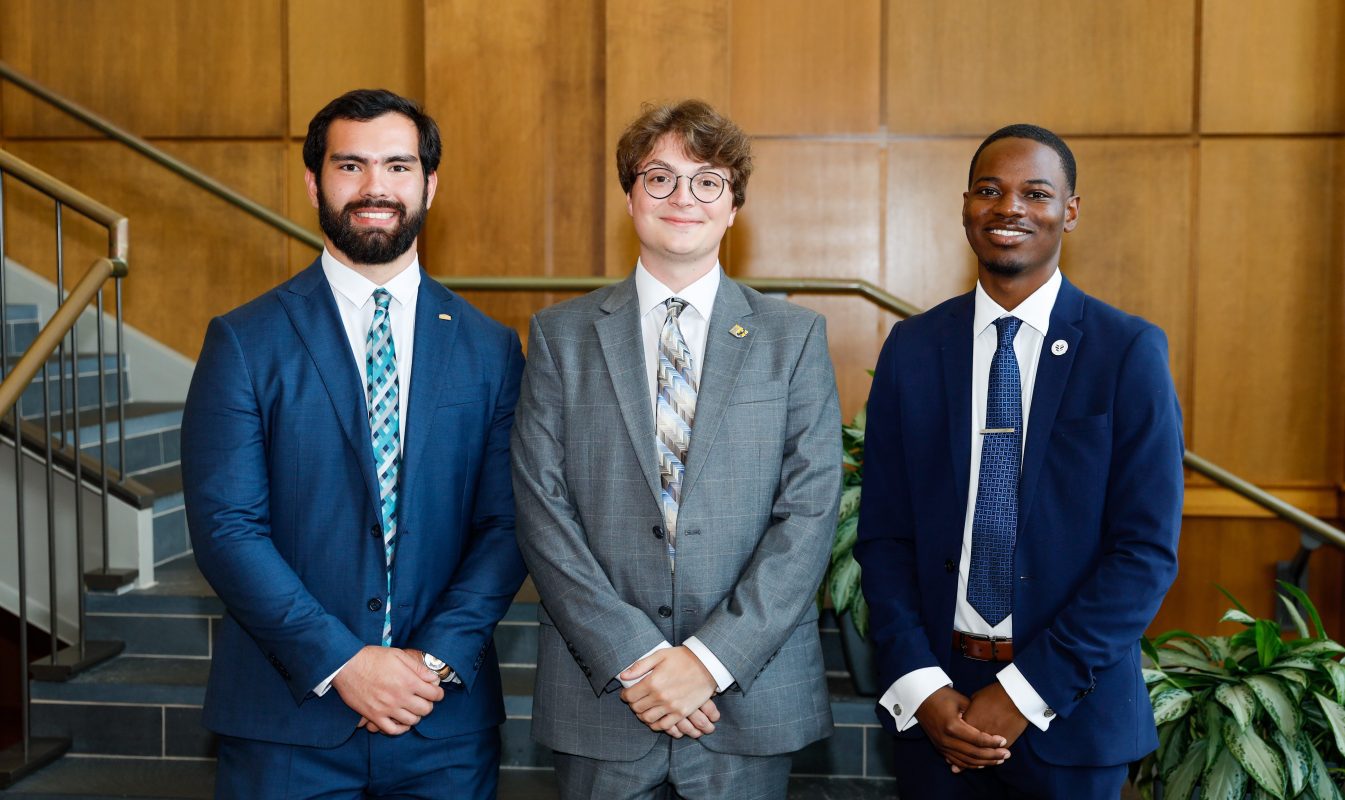 Presidential Scholars serve a one-year appointment and provide a wide range of professional functions for the UNC System Office. The scholars interact with the president, his senior leadership team and members of the UNC Board of Governors. They also work in areas including education, public policy, research and strategic initiatives that affect higher education.

The scholars were selected from a competitive pool of applicants who demonstrated leadership skills, intellectual curiosity and a strong interest in higher education and public service.

Chris Bouzane, of Wake County, is a graduate of the University of North Carolina at Greensboro, where he earned a Bachelor of Arts in history and political science with a concentration in public affairs. While at UNCG, Bouzane served as a student leader on campus, holding multiple positions in the UNCG Student Government Association (SGA). In these positions, Bouzane worked cooperatively to allocate funds for free academic and community initiatives, added Juneteenth to the academic calendar and protected the medical amnesty policy on campus. In response to COVID-19, he worked alongside faculty, staff, administrators, and other student leaders to address the challenges resulting from class delivery shifts, policy changes and internet accessibility. Outside of SGA, Bouzane served as a contributing writer to The Carolinian, writing about issues and policies concerning students and Greensboro residents. As a presidential scholar, he plans to continue the work he began as an undergraduate student leader and learn from some of the state’s most impactful leaders. Afterwards, Bouzane hopes to continue his education in graduate school and work in public service.

Derrick C. Stanfield, of Durham, is a summa cum laude graduate of the North Carolina Central University, where he earned two Bachelor of Arts degrees, one in history and one in political science. As an undergraduate student, Stanfield served as the student body president at NCCU and a member of the NCCU Board of Trustees. He also served as the senior vice president of the UNC Association of Student Governments. In 2020, Stanfield was selected as a UNC System Marian Drane Graham Scholar where he interned with the N.C. Department of Military and Veteran Affairs while conducting research on the attainment of higher education for working-class students. Stanfield was awarded the Chancellor’s Award for Truth & Service, NCCU’s highest honor for undergraduate students, due to his committed service, exemplification of good moral character and outstanding academic achievement, while making an impact on the NCCU campus and surrounding community. He plans to use his time as a presidential scholar to further his understanding of education policymaking as it relates and strengthen the skills necessary for his future career in legislative engagement.

Robert Fensom, of Fayetteville, graduated summa cum laude from the University of North Carolina Wilmington with a dual Bachelor of Arts in philosophy and communication studies. His honors thesis critiqued selected philosophic conceptions of legal and social toleration, and he was awarded a university fellowship to study World War II Japanese internment and the subsequent legal redress movement. Outside of academics, Fensom dedicated four years to the Student Government Association culminating in service as student body president during his senior year. In this role, he focused on issues such as food insecurity, freedom of expression and campus sustainability initiatives. He was also an active member of the Asian Student Association, Philosophy and Religion Society and Chess Club.

About The University of North Carolina System

The University of North Carolina System enrolls nearly 250,000 students at 17 institutions, including the state’s 16 public universities and the nation’s first public residential high school for academically gifted students. The UNC System is among the strongest and most diverse higher education systems in the country, with more than $1.8 billion in research expenditures and campuses that serve every region of the state. Affiliate organizations include UNC Health and PBS North Carolina, with its 12-station broadcast network.