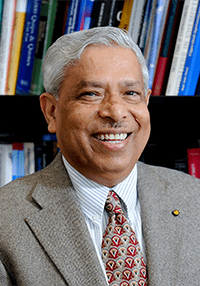 Dr. Jay Narayan, John C. C. Fan Family Distinguished Professor of Materials Science and Engineering at North Carolina State University, is the 2014 recipient of the O. Max Gardner Award – the highest faculty honor given by the Board of Governors of the 17-campus University of North Carolina. 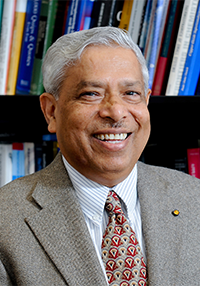 The award, established by the will of Gov. O. Max Gardner, recognizes faculty who have “made the greatest contribution to the welfare of the human race.”  It is the only award for which all faculty members on the 17 UNC campuses are eligible. The 2014 award carries a $20,000 cash prize and was presented today (April 11) by Board of Governors Chairman Peter Hans and Gardner Award Committee Chairman Phil Walker.

Narayan has made groundbreaking contributions to the field of materials science, most notably applying nanotechnology to enhance the efficiency of solid-state lighting’s key technology—light-emitting diodes, or LEDs, into an efficient, viable technology for widespread commercial use. Increased use of LED lighting will significantly reduce greenhouse emissions, energy costs, and the consumption of oil, gas, and nuclear power.

LEDs also have important applications in the areas of defense, national security, consumer electronics, and medicine. Narayan’s work, for example, has led to the creation of microelectronics with increased functionality and the development of smart structures and sensors that can be used to detect bioterrorist threats or create smart grid technology.

He has also invested nano-oil and nano-fuel additives to improve fuel efficiency by as much as 25 percent and reduce exhaust pollution by as much as 50 percent.  These products are now being tested in the U.S. and abroad.

Narayan, who has published nine books and over 500 papers in scholarly journals, holds more 40 U.S. patents. Since joining NC State’s faculty in 1983, he has developed eight graduate courses that are connected with his research, three of which are offered via the Engineering Online Network to engineers within the microelectronics and photonics industry.  He has mentored more than 65 Ph.D. students and trained numerous postdocs who are employed in leading companies and universities.

In 2011, Narayan received both the Reynolds Prize, NC State’s highest honor for excellence in research, teaching and extension; and the Acta Materialia Gold Medal and Prize for pioneering contributions and leadership in materials science worldwide. He received the Alexander Holladay Medal, NC State’s highest faculty honor, in 2012, and is the 2014 recipient of the Robert Franklin Mehl Gold Medal, given by the Materials Society for pioneering contributions in nanomaterials and nanotechnology leading to useful commercial products.

Born in India, Narayan received his bachelor’s degree from the Indian Institute of Technology in Kampur and holds master’s and doctoral degrees from the University of California, Berkeley. At NC State, he was named Distinguished University Professor in 1990, and John C. C. Fan Family Distinguished Professor in 2002.