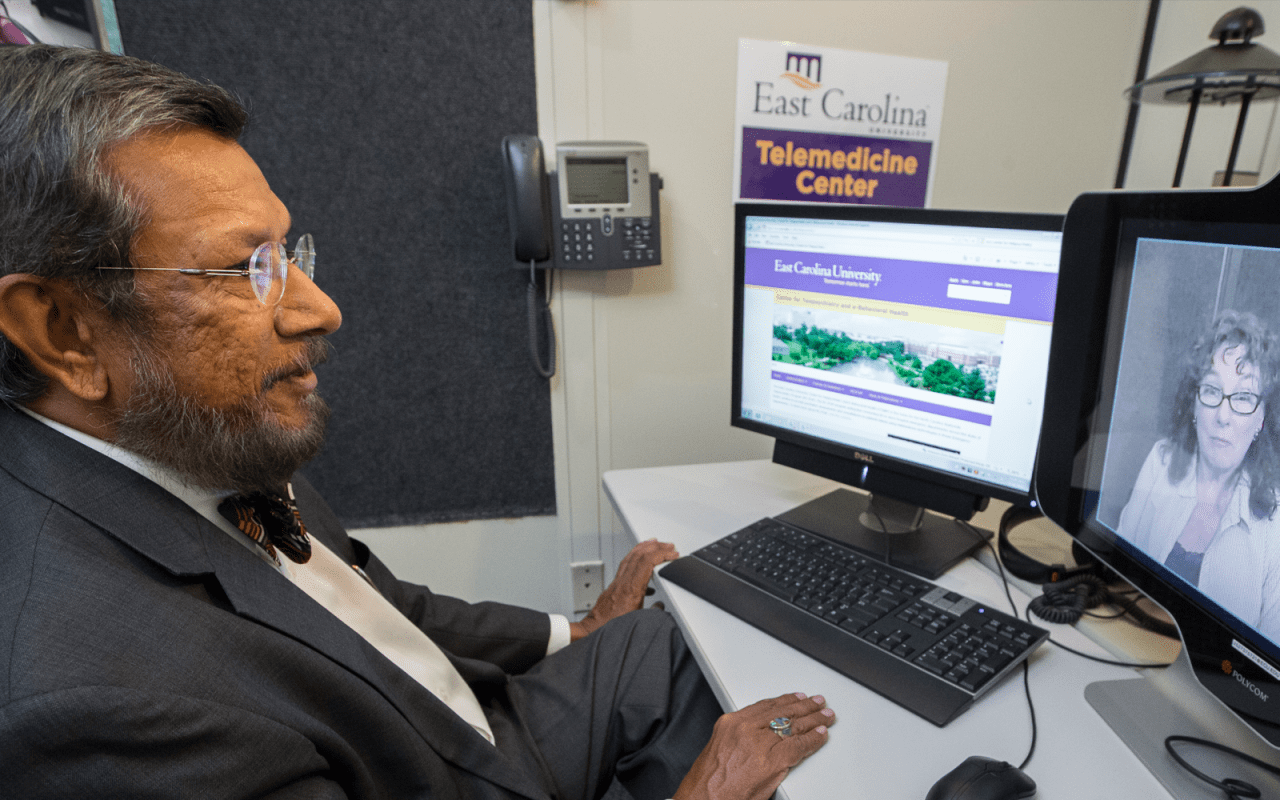 CHAPEL HILL, NC – The University of North Carolina System has announced that Dr. Sy Atezaz Saeed, chair of the Department of Psychiatry and Behavioral Medicine at East Carolina University, is the recipient of the 2019 Oliver Max Gardner Award.

The award, established by the will of former North Carolina Governor O. Max Gardner in 1947, recognizes faculty who have “made the greatest contribution to the welfare of the human race.” The winner is selected by the UNC Board of Governors and receives a $30,000 stipend. The O. Max Gardner Award is the highest honor the System confers on faculty and all faculty members across all of its 17 campuses are eligible. Dr. Saeed is the ninth faculty member from East Carolina University to receive the award since its inception.

“Health care in all of its forms is so critically important to North Carolina, and Dr. Saeed is an accomplished leader in the field of behavioral medicine,” said UNC System Interim President Bill Roper. “His steadfast commitment to improving mental health practices, to research and to serving the greater good and people of this state exemplify the spirit of the O. Max Gardner Award.”

Since 2004, Dr. Saeed has served as chair of the Department of Psychiatry and Behavioral Medicine at the Brody School of Medicine at ECU. He also serves as the executive director of Behavioral Health Service Line for Vidant Health, a non-profit hospital system made up of eight hospitals, physician practices, home health, hospice, wellness centers and other health care services, serving 1.4 million people in 29 counties in Eastern North Carolina. In addition, Dr. Saeed serves as the director of the Center for Tele-psychiatry at ECU and as the Founding Director of North Carolina Statewide Tele-psychiatry Program (NC-STeP), a state-funded program covering over 60 hospitals in North Carolina.

A 1982 medical graduate of Dow Medical College, Dr. Saeed completed his residency training in psychiatry at the Illinois State Psychiatric Institute, Chicago. He is a diplomat of the American Board of Psychiatry and Neurology. He is also certified in psychiatric administration and management by the American Psychiatric Association and holds a Master of Science in Counseling and Psychotherapy.

“The Board of Governors is always proud to recognize those individuals who go above and beyond the call of duty,” UNC Board Chair Harry Smith said. “Dr. Saeed has demonstrated throughout his impressive career a dedication to service and to improving the lives of people throughout this state, nation and planet.”

Prior to his appointment at ECU, Dr. Saeed served as professor and chair of the Department of the Psychiatry and Behavioral Medicine at the University of Illinois College of Medicine at Peoria from 1995 to 2004. In addition, he was also the clinical director for the Comprehensive Community Mental Health Service NetWork of North Central Illinois, a state-operated organization serving people with serious and persistent mental illness in 23 counties and covering 1.5 million lives in north central Illinois.

Dr. Saeed was the founding editor of the American Association of Psychiatric Administrator’s journal, Psychiatrist Administrator, from 2000 to 2010. He is currently the editor-in-chief of the Journal of Psychiatric Administration and Management (JPAM). He serves on the editorial boards of several academic journals and has over 100 scholarly articles or products to his name. He is a fellow of the American College of Psychiatrists, a Distinguished Fellow of the American Psychiatric Association, and an elected Fellow of the Royal Society of Health in London, England. He also serves on the Group for Advancement of Psychiatry (GAP), a think-tank for psychiatry dedicated to shaping psychiatric thinking, public programs, and clinical practice in mental health. In 2018 he was elected to the Governing Board of GAP. In 2014 Governor Pat McCrory appointed him to the Governing Board of the North Carolina Institute of Medicine. In 2016, he was reappointed to the board for a four-year term by the governor.

Dr. Saeed has published extensively in the areas of evidence-based practices; anxiety and mood disorders; tele-psychiatry; psychiatric administration and leadership; and psychiatric treatment integration. His current scholarly and research interest areas include: the study of the process and impact of implementing evidence-based practices in mental health settings; tele-psychiatry; and psychiatric administration and leadership. He has been involved in funded research both as a principal investigator and co-investigator, with over $14 million in external funding since 2004. He has lectured and presented nationwide and internationally, including being an invited speaker at a convening at the White House in Washington, D.C. in 2016.