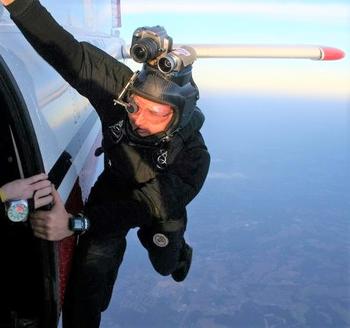 For years, the United Nation’s World Food Program has been fighting the hunger crisis in Africa by using food airdrops to reach remote villages in South Sudan.

Recently, the UN World Food Program was awarded the Nobel Peace Prize for its humanitarian efforts. Some 7,000 miles away at UNC Pembroke, Physics Professor Steven Singletary found satisfaction knowing that his ingenuity is helping feed thousands of Sudanese facing starvation.

He was responsible for developing, designing and testing parachutes used to the make the airdrops. The parachutes were manufactured by a company contracted by the UN World Food Program.

“When I first saw the report about the UN winning the Nobel Peace Prize, I said, ‘Wow!. That’s my work!’ It’s very exciting. It’s hard to quantify in words what it means. The fact that so many people are eating as a result of something I designed is really satisfying,” Singletary said. “The big thing for me, I don’t care about notoriety, but if we could use this exposure to attract more kids to stem disciplines and our 3-plus-2 program … that’s the big thing for me,” he added.

Dr. Singletary is in his second year as a clinical assistant professor in the Chemistry and Physics Department and is heavily involved in UNCP’s 3-plus-2 engineering program with N.C. State.

His expertise is in materials engineering, aerospace engineering and chemical thermodynamics. Recently, Singletary’s ingenuity was recognized globally for his design and development of parachutes being used to make food airdrops in South Sudan. Last week, the United Nations World Food Program was awarded the 2020 Nobel Peace Prize for its efforts to combat hunger, specifically for food airdrops. The World Food Program planes are dropping food that could not otherwise reach people living in famine-like conditions.

Singletary has more than two decades of experience as a skydiver, skydiving instructor and a senior parachute rigger. A native of Tar Heel, N.C., he served in the U.S. Marine Corps before earning a degree in math and computer science from UNCP. He also holds a master’s degree in geology from Texas Christian University and a doctorate in geochemistry from the Massachusetts Institute of Technology (MIT).