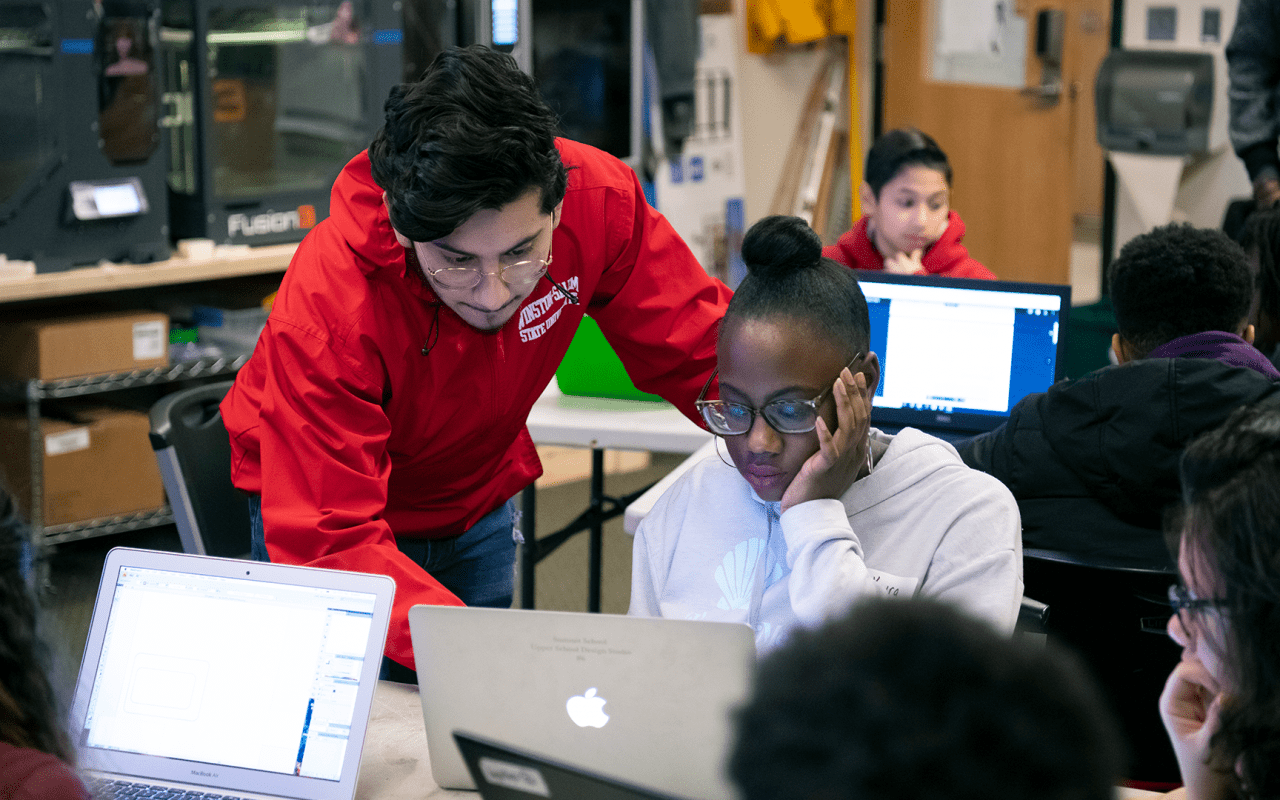 According to the Federal Highway Administration, there are now more women behind the wheel than men. But when it comes to the business of building what’s under the hood, the numbers tell a different story.

UNC System institutions are hard at work designing more entrance ramps that will get a more diverse workforce into automotive and other STEM (science, technology, engineering, and math) professions.

The UNC System’s Strategic Plan prioritizes building North Carolina’s critical workforces by “increasing the number of high quality credentials … awarded in the fields of health sciences, STEM, K-12 education, and other emerging regional workforce needs.” To this end, many UNC System institutions have specifically prioritized initiatives to increase the overall number of STEM majors. Many of these initiatives specifically work to entice more women and underrepresented student populations to pursue STEM programs.

Across the UNC System, the push to diversify the STEM workforce begins by diversifying the STEM classroom.

Any institution committed to diversifying the STEM classroom must first confront a culture of doubt. Negative stereotypes have historically portrayed women and students of color as being less suited for technical professions. Unfortunately, students absorb these lessons at an early age. The UNC System’s work begins by tackling these deeply engrained and misguided assumptions.

Several initiatives at Winston-Salem State University reach out to women and under-represented students, encouraging them to see a career in STEM as viable, achievable, and intellectually rewarding.

The university’s Girls Empowered in Math and Science (GEMS) academy inspires young women in Forsyth County to pursue higher education. As its name implies, GEMS is creating a culture that promotes female success and empowerment. The program engages fourth- through seventh-graders, instilling a “can-do attitude” at an early age.

Over the course of a decade, more than 1,500 girls have participated in the program. GEMS offers monthly Saturday academies throughout the school year and a weeklong summer program. All girls in Forsyth County are encouraged to participate. And, because GEMS is supported by WSSU’s Department of Education, WSSU’s own education preparation students serve as program mentors.

“Women, in general, are an underserved population in STEM careers, and women of color are even less represented in these careers.” Johnson said. “GEMS provides girls the academic foundation and the fortitude to be successful in any STEM environment – academic institutions and the workplace.”

This summer, GEMS celebrated its 10th anniversary with a special two-week camp, funded through a $36,106 grant from the North Carolina Department of Transportation. The camp focused on exposing girls to careers in transportation. Participants pursued a host of transportation-themed activities, including boat building and drone operation.

In 2018, GEMS received the INSIGHT Into Diversity magazine’s Inspiring Programs in STEM Award, which honors outstanding work at colleges and universities to encourage students from underrepresented groups to enter STEM fields. Earning this national recognition is a remarkable achievement, but Dr. Johnson looks elsewhere to get a truer measurement of GEMS’ success: the classroom.

“In middle school, GEMS had a big impact on my desire to study science,” GEMS alum Tanya Zubov says. “I remember doing different science experiments and speaking with different women in STEM fields. Speaking to these women made me want to be like them when I grew up.”

This formative experience has had a long-lasting impact. Zubov did indeed go on to pursue higher education … at WSSU. She also pursued summer research opportunities at Wake Forest University, the University of Alabama at Birmingham, and Rutgers University. She worked in a variety of research labs. And, in May 2019, she earned her bachelor’s degree in biology.

“Girls often see in social media that we are the ‘dumb’ ones and are supposed to let men work the hard jobs in science,” she said. “By teaching girls at a young age that they can do anything they want to do, [GEMS will help] break this stereotype in the future.”

GEMS isn’t WSSU’s only award-winning STEM-diversity program either. The September 2019 issue of INSIGHT Into Diversity magazine honors two WSSU programs with its Inspiring Programs award: the North Carolina Math and Science Education Network (a year-round pre-college program for underrepresented children in sixth-12th grades) and The School of Health Sciences’ Early Assurance Programs (which create opportunities for WSSU undergraduate students to continue their education in one of the university’s competitive graduate programs).

The fact that WSSU is one of only two colleges or universities in the nation to receive multiple Inspire awards in 2019 is a powerful testament to the UNC System’s leadership in getting underrepresented students motivated to try and succeed in STEM fields.

UNC System institutions understand that building diverse STEM programs requires more effort than getting incoming students interested. The universities are also working to ensure that the women and minority students who begin a STEM program have the support they need to finish.

At UNC Greensboro, only 45 percent of STEM majors persist to their sophomore year, and  underrepresented and female students face hurdles in these disciplines that others don’t. Through its Science, Technology and Math Preparation Scholarships (STAMPS) program, UNCG is improving the odds, supporting promising female and minority students so that they follow through to graduation.

Through funding from the National Science Foundation, STAMPS offers scholarships, worth up to $4,000 per year for four years, to academically talented and financially challenged minority, female, and first-generation college students seeking degrees in STEM.

“A lot of evidence suggests that if students feel they are part of a community, they stay in school,” says Dr. Lynn Sametz, STAMPS co-principal investigator and co-director of UNCG’s Research and Instruction in STEM Education Network.

As STAMPS scholars persist, they have opportunities to serve as mentors to incoming students. They visit research sites and network with guest speakers. They take coursework specifically designed to help them better understand the various career opportunities available to STEM graduates. All of these opportunities help STAMPS scholars recognize how their university education is a pathway to a more fulfilling life and career.

“They find out who they are,” observes Dr. Jeffrey Patton, a professor of geography and co-principal investigator. “They start to think of themselves as scientists and know that they can contribute.”

The program enrolls first-year students. In its first three years,  53 students have joined STAMPS under the current five year National Science Foundation award (1643112) .  Of the 39 students in the first two cohorts, 35 are still enrolled at UNCG … “which is amazing!” said Dr. Sametz.

Given the program’s early successes, it didn’t take long for STAMPS to garner accolades. In 2018, INSIGHT Into Diversity recognized STAMPS with the magazine’s Inspiring Programs in STEM award.

“Successful diversity programs spend years building the trust of the leaders in underserved communities, and once the trust pipeline is established, and there is a supporting network of mentors in the academic unit, then and only then, will these efforts become self-sustaining,” explained Tom Gower, professor and head of NC State’s Forestry and Environmental Resources Department.

Building this trust pipeline is a motivating force behind a recent partnership between NC State and Alabama-based Tuskegee University.

According to the Census Bureau, less than three percent of foresters and conservation scientists in the United States are African-American. Research suggests that, as in other STEM fields, women and people of color are less likely to pursue a career in forestry and natural resources due to economic, cultural and discrimination-related barriers.

In addition, underrepresented groups, especially inner-city students, often have limited access to green spaces and opportunities for outdoor recreation and are thus less likely to become interested in natural resources, according to Dr. Bolden-Tiller, professor and head of the Department of Agricultural and Environmental Sciences at Tuskegee University.

To address this disparity, the NC State College of Natural Resources and Tuskegee University are joining forces to offer an accelerated graduate degree program to students from underrepresented groups who are interested in pursuing forestry careers. The new program will launch in January 2020.

At the end of the five years, students will have earned a Bachelor’s of Environmental, Natural Resource and Plant Sciences from Tuskegee and a Master’s of Forestry from NC State. The master’s degree curriculum is accredited by the Society of American Foresters — an industry standard for practicing foresters in North Carolina, Alabama, and many other states.

“The primary purpose of the program is to recruit more students from underrepresented groups and increase their awareness of career opportunities in forestry and natural resources,” said Sam Cook, executive director of forest assets at NC State’s College of Natural Resources.

“Tuskegee University and NC State share a strong commitment to promoting diversity and inclusion in the forestry profession, and we are extremely excited about this partnership as it will provide an opportunity for our students to capitalize on the growing demand for trained foresters in both the public and private sectors,” said Dr. Bolden-Tiller.

According to Professor Gower, increasing diversity is critical to solving the complex challenges of the 21st century – not just in forestry, but across the entire spectrum of American society.

“The world is rapidly changing and diverse perspectives, formed from diverse experiences, are instrumental to developing sustainable solutions to the global challenges of any organization, whether it’s a family-run company or Fortune 500 company,” Gower said. “I am an ecologist, and the more diverse the species composition of an ecosystem is, the more resilient and productive the ecosystem is to perturbation, such as climate change. I believe the same is true for society.”

The initiatives at WSSU, UNC Greensboro, and NC State aren’t the extent of UNC System efforts to diversify STEM. Far from it. The System Level Dashboards offer a snapshot of what’s happening at other institutions to encourage more female students, students of color, and first generation students into STEM classrooms and onto the graduation platform.

This work will support North Carolina’s long-term prosperity. According to the Pew report, Americans acknowledge that workplace diversity makes good economic sense. Cultivating a diverse work environment can contribute to a company’s long-term success. With diversity comes a capacity to gather the variety of perspectives managers need to solve sticky problems. Diversity can also help create a more positive work environment and, in turn, increase productivity. Furthermore, STEM workers earn more than their non-STEM counterparts; bringing more diversity into STEM fields will help level out wage disparities across the state.