Gilliam Named Chancellor of the University of North Carolina at Greensboro 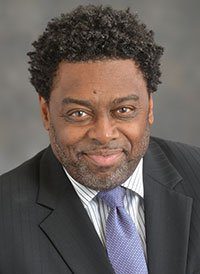 Franklin D. Gilliam, Jr., dean of the Luskin School of Public Affairs at the University of California, Los Angeles, has been elected chancellor of the University of North Carolina at Greensboro by the Board of Governors of the 17-campus University of North Carolina. Acting on behalf of UNC President Tom Ross, who is recovering from shoulder surgery, UNC Senior Vice President for Academic Affairs Junius Gonzales placed Gilliam’s name in nomination today (May 22) during the board’s regular May meeting. Gilliam, 60, will assume his new duties September 8, succeeding Acting Chancellor Dana Dunn, who has led the institution since Linda Brady began medical leave in March following heart surgery.

Consistently ranked among the world’s top-tier universities, the University of California, Los Angeles, is a public research university enrolling more than 42,000 students. It offers 125 majors, has 40 doctoral programs that rank among the top 10 in their fields nationwide, and attracts more than $1 billion in competitively awarded research grants and contracts annually. In recommending Gilliam to the Board of Governors, Ross said in a prepared statement: “In a stellar career that spans three decades, Frank Gilliam has distinguished himself as a faculty member, researcher and top-notch administrator. He has taught and held senior leadership positions at one of our nation’s best known and most respected public universities. And at each step along the way, he has proven himself to be an engaged and effective leader who promotes openness and collaboration, strategic thinking and creative problem-solving, and a real-life commitment to academic excellence and community partnership. UNC Greensboro is fortunate to gain a leader with this wealth of talent, passion and commitment.”

A long-time UCLA professor of public policy and political science, Gilliam has served as dean of its Luskin School of Public Affairs since 2008. Founded in 1994, the school incorporates best practices in scholarship, research and teaching in the fields of social work, urban and regional planning, and public policy – all nationally top-ranked graduate programs.

As dean, Gilliam has focused on establishing UCLA Luskin as a leader in finding solutions to society’s most pressing problems – from juvenile justice to drug policy, from child welfare and health care reform to transportation and the environment. He also secured a $50-million naming gift for the school and has launched new campaigns to elevate its mission of public service. Under his leadership, it has launched major administrative and educational initiatives ranging from an ambitious centennial fundraising campaign and strategic planning initiative to programs in global public affairs, leadership, digital governance, and inequality. The school’s active research centers include the Lewis Center for Regional Policy Studies, the Institute for Transportation Studies, the Center for Policy Research on Aging, the Luskin Center for Innovation, and coming August 1, the new Institute on Inequality and Democracy.

Since 2013, Gilliam has also served a dual role as the Chancellor’s Special Advisor on Los Angeles, providing strategic advice on plans and opportunities for UCLA to engage the broader Los Angeles community.

Rising through the academic ranks, Gilliam was named associate director of UCLA’s Center for the Study of American Politics and Public Policy (1993-98), supporting strategic planning and research for the UCLA program in Washington, and was a founding director of the Center for Communications and Community (1997-2002).

In 2002, Gilliam was named the University of California System’s first-ever associate vice chancellor of community partnerships. In that role, he facilitated engaged scholarship and community collaborations to improve the quality of life in Los Angeles and secured $5 million to fund faculty/community projects . Due in large part to his efforts, UCLA earned its first Carnegie Foundation Community Engagement classification. He held that position until being named dean of UCLA Luskin in 2008.

Gilliam’s research interests include strategic communications and its effects on shaping public policy, electoral politics, and racial and ethnic politics.  He is the author of Farther to Go: Readings and Cases in African American Politics, and his work has been published in many leading academic journals. He also helped to establish and is a senior fellow with the FrameWorks Institute, the 2015 winner of the MacArthur Award for Creative and Effective Institutions. He is frequently interviewed or cited by national and international news outlets such as CNN, The New York Times, The Washington Post, NPR, HuffingtonPost and the BBC.

Gilliam has twice been nominated for UCLA’s Luckman Distinguished Teaching Award. His awards and honors include the Liberty Hill Foundation’s Upton Sinclair Award (2015), the University of Iowa’s Distinguished Alumni Award (2006-07), the Drake University Double D Award (2006) and the Mark O. Hatfield National Scholar Award (2004). He serves on the boards of the United Way of Greater Los Angeles and Southern California Grantmakers Association and chairs the Blue Shield of California Foundation.

Gilliam is married to Jacquelean Gilliam, Executive Director of Scholarships & Student Support Initiatives and Campus-wide Initiatives at UCLA. They have two children: Ariel Gilliam, 22, who will graduate from UCLA in June with a degree in history; and Franklin D. “Trey” Gilliam, III, a junior at University High School in West Los Angeles.