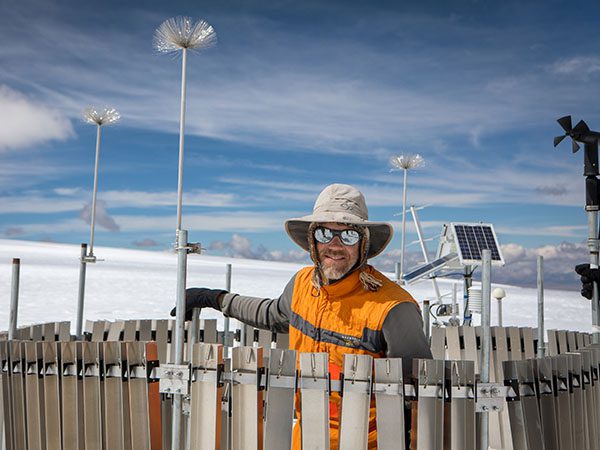 Appalachian State University’s Dr. Baker Perry in the Department of Geography and Planning is a superhero in the field of climate science — and for a 4-year-old in Brazil interested in Mount Everest and the professor’s work there.

“Thanks for all the important work you do and for being a role model to my kids,” wrote the father, who also shared his son calls Perry his “superhero” and even dresses up like Perry in make-believe high-altitude gear.

In response, Perry sent the family a recording of himself talking about his work and encouraging the youngster and his twin sister to keep up their interest in science.

Perry was part of the meteorology team that installed the world’s highest weather station at 27,657 feet above sea level as part of the Mount Everest expedition.

He is recognized as one of the top experts in climate science — one of a handful of researchers who have placed weather stations at high elevations worldwide to study the changes in climate and their impacts on populations.

Data from the Mount Everest weather station are helping improve forecasting on the mountain, predict future glacier extent in the region and water resources, and understand the subtropical jet stream.

“In both of the Himalayas and in the Andes, climate change is not some abstract idea. It’s direct. It’s observable and it’s something that people are very concerned about because it’s had direct impacts on their livelihoods — through the water, through their livestock, through their crops and ability to irrigate,” Perry said in a January 2020 “Find Your Sustain Ability” podcast produced by App State.