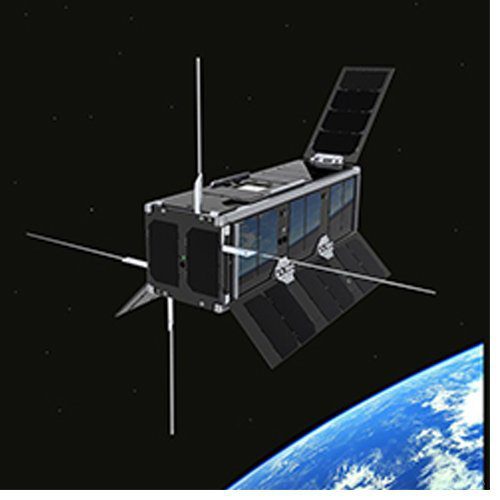 Thanks to a $2.4 million grant (SOCON: Sustained Ocean Color Observations with Nanosatellites) from the Gordon and Betty Moore Foundation to the UNCW Department of Physics and Physical Oceanography, a UNCW professor is months away from launching a nanosatellite equipped to offer global scientists a colorful new view of the ocean.

UNCW Center for Marine Science Professor John M. Morrison named the ocean color nanosatellite, or CubeSat, SeaHawk. Once launched, the small but powerful device will expand UNCW’s marine research capabilities, providing a unique vantage point for observing the changing biology in the ocean’s surface, alerting researchers to everything from the onset and expansion of harmful algal blooms to potential fishing zones.

“No other university has a satellite like this,” Morrison said with a smile. “Sure, there are a lot of universities launching CubeSats, but none are generating a dataset that will be made available to the international community. Landsat ocean color images traditionally cost about $1,000 each, and UNCW’s will be free to everybody. It’s pretty remarkable!”

Alongside his self-selected “dream team” of international scientists, with representatives from NASA’s Goddard Space Flight Center, Cloudland Instruments and Clyde Space, Morrison has spent the last two years painstakingly developing SeaHawk and its valuable cargo: a groundbreaking ocean color sensor, dubbed HawkEye. Their work thus far, made possible through a previous $1.8 million Moore Foundation grant, has been a labor of love that’s finally about to pay off.