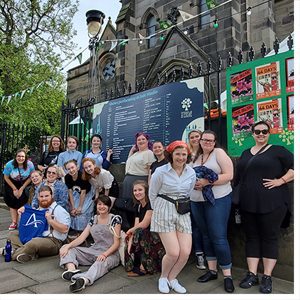 “You just have to stay confident when you’re talking about nothing,” says Will Skinner, a rising UNC Asheville sophomore from Littleton, N.C., who has been walking up to strangers in the streets of Edinburgh and Glasgow in Scotland, “flyering,” trying to gather an audience for the university’s production of Nothing’s Happening: A Black Mountain College Project.

With thousands of performers having descended upon Scotland vying for attention at the world-famous Festival Fringe, promoting one’s show can be a performance challenge rivaling the staging of the show itself. As he gives out his handbills, Skinner asks, “What do you know about nothing? Would you like to see a show about absolutely nothing?” And when people stop, startled by those questions, Skinner gets a chance to describe the adaptation of John Cage’s famed Lecture on Nothing that he, along with other students and recent graduates, are staging in Edinburgh.

“At the Fringe, we have people in the audience who know John Cage or Black Mountain College,” said rising senior Lea Gilbert. “The show is meant to open eyes and start a conversation, and it has – it’s been great to talk to people after the shows. It’s awesome to get an immediate response.” The students’ peers from other campuses who have come to the Fringe to perform have been especially enthusiastic, according to Dakota Mann, another senior. “We’ve performed for a lot of college students our age and their response has been astounding.”

The UNC Asheville troupe previewed Nothing’s Happening with performances on campus at Belk Theatre in April, and after a few months away, they regrouped in late July to tweak the show and rehearse for the Fringe. The show’s second run has been a growth experience, said Gilbert. “With every show, I find something new to explore in it, because it’s such an open-ended show. There’s so much to dig in with John Cage, and with each show, I really challenge myself to listen to the lecture, and understand it or not understand it and be confused by it – that’s my goal with every show.”