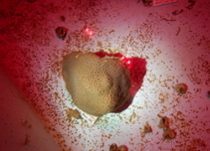 The Coral REEF lab at UNCW’s Center for Marine Science has induced coral spawning in captivity, making it the first lab in North Carolina to do so.

“This is a giant leap forward to not only understand the mechanisms involved in the reproduction of this threatened species, but to create the next generation of corals to restore coral reefs,” said Nicole Fogarty, assistant professor in the Biology and Marine Biology department and lead researcher.

Her lab is the first facility to spawn Orbicella faveolata in captivity, a coral listed as threatened on the U.S. endangered species list.

“Being able to spawn corals in captivity is a game-changer,” Fogarty said. “Not only are we able to conduct research on coral fertilization and the earliest life history stages without affecting the natural population, but spawning corals and rearing the resulting babies have huge implications for coral restoration.”

Spawning takes place in the Spawning and Experimentation of Anthropogenic Stressors (SEAS) facility located at UNCW’s Center for Marine Science. Tanks are run by a high-tech computerized system, called the Neptune Systems Apex, that adjusts the water temperature and Ecotech Marine lights based on the season and controls lunar lights that mimic the moon cycle, explained Fogarty. In addition, the lab’s 36-tank experimental set-up allows researchers to manipulate temperature, light, pH, salinity, and oxygen for experimentation on corals across all life stages.

The lab researches coral reproduction and how human stressors, such as ocean warming and acidification, low oxygen levels, sedimentation, microplastics and other pollutants can alter reproduction and the overall health of corals from babies to adults.

“Coral reefs have declined worldwide and recent disease outbreaks have reduced Florida and Caribbean populations even further,” she continued. “The only way we can create new genetic combinations is through sexual reproduction. Genetic variation is imperative to a healthy and resilient ecosystem.”

Researchers hope to have multiple colonies of the same species spawn on the same night for successful fertilization and many new genetic combinations.

“The next big hurdle is to have these corals spawn after being in captivity for an entire year,” Fogarty said. “Having access to coral spawning will allow us to examine many aspects of fertilization, development and stressors that impede these important first steps in a coral’s life cycle. Our data can inform managers and restoration practitioners to help protect and restore these species.”Besides the Orbicella faveolata, the coral species Pseudodiploria clivosa is also a part of the spawning research and one colony also spawned in the SEAS facility. This is the first captive spawning observation for this species. The Coral REEF lab is also rearing small fragments of another threatened coral, Acropora cervicornis, in the hope of spawning those colonies next year.

“We have limited space and resources, so my lab is focused on these two species this year,” Fogarty explained. “These species are important reef builders, but an emerging disease has led to substantial losses in Florida. Now, this disease is spreading in the Caribbean, threatening this magnificent ecosystem. Spawning corals in captivity gives us hope that we can help restore coral populations.”

Fogarty’s partners at the National Oceanic and Atmospheric Administration and the Florida Wildlife Commission have supported and permitted the research. Her colleagues at the Florida Aquarium and Nova Southeastern University have provided helpful captive spawning guidance and collected the corals that spawned. She is assisted by UNCW ITS and CMS staff (Ron Moore and Jimmy White); a team of UNCW graduate students (Bryce Corbett, Sharla Sugeirski, Reanna Jeanes); undergraduate students (Ryan Besemer, Chad Campbell, Pantho Tsali), and technician Kory Enneking, who was instrumental in the development, maintenance and continued improvement of the spawning system.