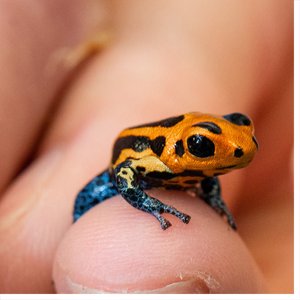 An East Carolina University faculty member is part of an international research team that may one day lead humans to use biology – not body chemistry – to find their next mate.

Kyle Summers, a biology professor in ECU’s Thomas Harriot College of Arts and Sciences, and researchers from 10 other universities are cracking the code of relationship genetics. The team has found a collective group of 24 genes that could account for monogamy and biparental care across multiple vertebrate species.

In the cover story of the Jan. 22 edition of the Proceedings of the National Academy of Sciences of the United States of America (PNAS), the team details its method of gene comparison between male species of poison dart frogs, mice, voles, songbirds and cichlid fish.

The sequencing technique used begins by extracting ribonuclelic acid – or RNA – that carries instructions from DNA required for protein synthesis. The RNA expressed in the brain tissue of the five species was then converted to DNA and sequenced to compare genes between monogamous mating pairs and promiscuous mates in each species.

The monogamous mating pairs’ genes were then compared across species to examine whether there were similar genetic markers between vastly different organisms.

Despite their research findings focusing on frogs, fish, small rodents and songbirds, the team’s results may have an effect on future human dating habits.