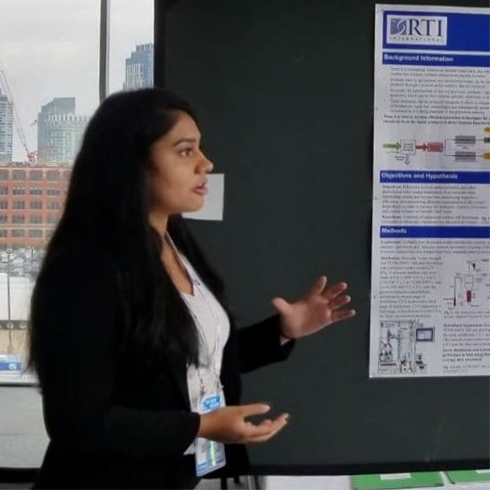 NCSSM ’18 graduate Sumani Nunna was a finalist in the highly competitive International BioGENEius Challenge in Boston.

The only participant from North Carolina, Nunna’s research focused on biomass-to-biofuel conversion. Her study, “Increasing the Economic Viability of Biofuels by Recovering Methoxyphenols As Value-Added Bioproducts,” caught the attention of many, including North Carolina Gov. Roy Cooper.

“There is a widespread reliance on harmful fossil fuels,” Nunna says. “While the use of biofuels can combat this reliance, biofuels remain economically inviable. Thus, it is vital to develop efficient separation technologies for recovery of high-value chemicals from biomass.”

The North Carolina School of Science and Mathematics gives its high school students the rare chance to take part in real-world research with industry and university scientists, an opportunity not typically available even to college undergraduates. Nunna’s research was inspired by her experiences at RTI International, where she was an engineering intern through the school’s “amazing” summer research program.