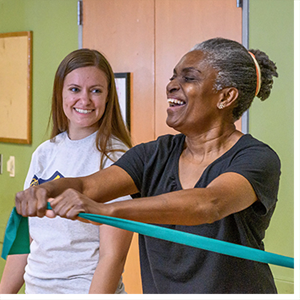 There is no cure for Alzheimer’s disease, the most common form of dementia. But what if something as simple as exercise could delay its onset?

That’s what Dr. Jennifer Etnier and UNC Greensboro’s Department of Kinesiology want to discover in their Physical Activity and Alzheimer’s Disease 2 study (PAAD2), which is now recruiting participants.

As a follow-up to the first PAAD study in 2013, which found that there were cognitive benefits associated with exercise, Etnier and her team have been awarded a five-year, $3.4 million National Institutes of Health (NIH) grant to support a full experimental design for PAAD2. This study will explore the hypothesis that those with a family history of dementia or Alzheimer’s disease can cognitively benefit from exercise.