Research That Keeps Us in the Game 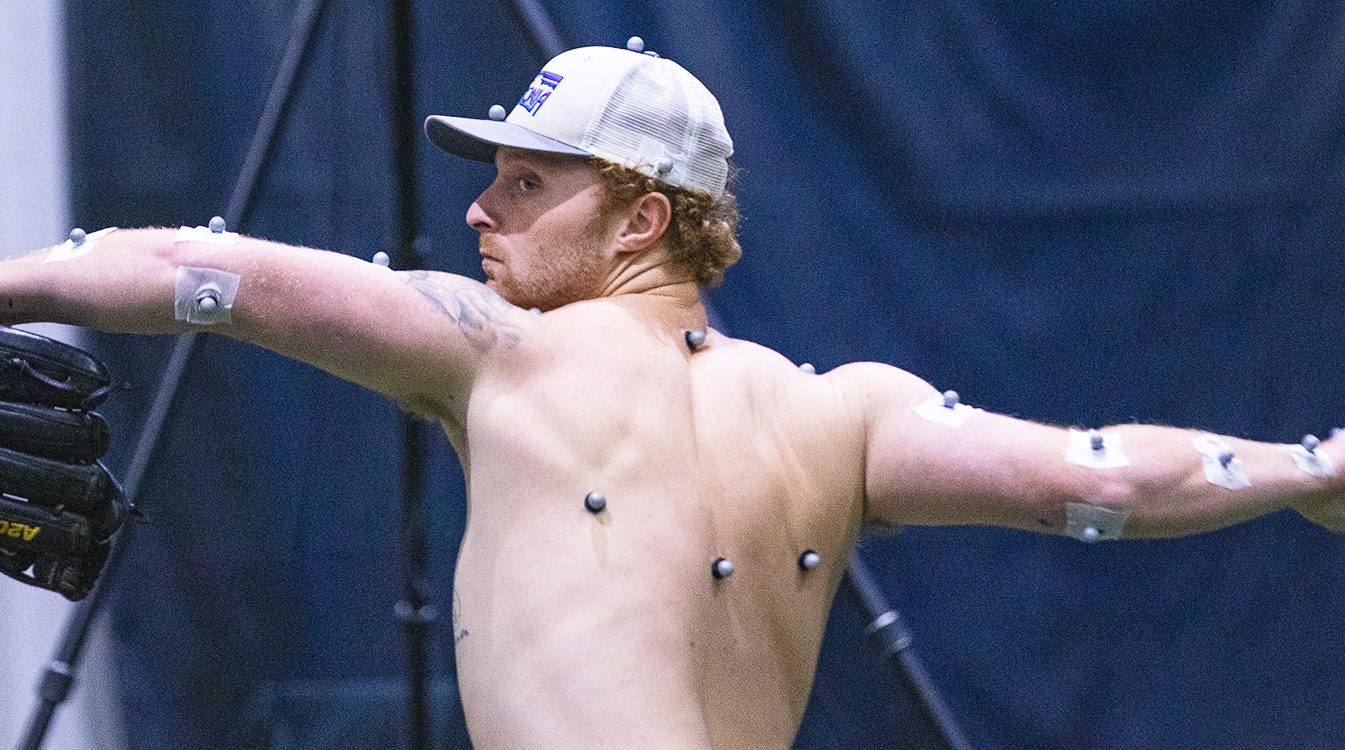 Our ballparks stood empty all through the spring. This week, they once again ring with sound—the crack of bats, the thump of balls landing in leather gloves, and the umpire’s bellows. The 2020 Major League Baseball season is finally here.

Professional ballplayers aren’t the only ones getting down to the serious business of play. More and more Americans are turning their eyes away from their streaming queues and looking instead for socially-distanced ways to get in shape.

As we take tentative steps toward resuming sports and outdoor leisure activities, the possibility of getting hurt ticks up along with our heart rate. But, innovative research taking place at our institutions is helping athletes prevent injuries and changing how physicians and therapists treat them.

In a word, the UNC System keeps professional and amateur athletes alike in the game.

As a baseball pitcher, Evan Voliva has simple goals.

“I just want to throw hard, throw well, and strike out a lot of guys,” he said.

As a fan of baseball and an East Carolina University doctoral candidate researcher, Christopher Curran set out to help Voliva and other pitchers do just that.

Curran’s work explores how technology may one day reduce injuries and improve pitcher performance. His research involves the collection of three-dimensional motion capture data of the full body during the pitching motion. The data help generate a visualization of the pitcher’s skeleton, which can be used to analyze pitching mechanics with a high level of precision.

Voliva is a 2019 ECU graduate and former member of the Pirates baseball team. The two Pirates convened at Next Level Training Center in Greenville, where Curran attached reflective markers to Voliva. The pitcher proceeded to toss a dozen fastballs so Curran could record the motion.

This elaborate game of toss is actually integral to Curran’s cutting edge research, which he undertook while completing his doctorate in bioenergetics and exercise science at ECU’s Department of Kinesiology. Curran, who just recently defended his dissertation, harnessed the power of his department’s sophisticated technology to help understand the effect pitching has on the size, shape, and material stiffness of muscles, tendons, and ligaments.

Every year, countless pitchers must submit to “Tommy John surgery” to reconstruct the ulnar collateral ligament (UCL) in the elbow. Curran said recent research has found that UCL in the elbow is less stiff in the throwing arm of pitchers than the non-throwing arm. Understanding tissue properties that are linked to injuries could help pitchers develop throwing motions that do less damage to muscles, tendons and ligaments, helping players maintain better health and optimize performance.

“If, down the road, we learn that throwing a certain way causes specific adaptations that may make someone more likely to get injured, we can work with coaches to change that,” Curran said. “I don’t think that means every pitcher should throw the same way. The amazing part of the technology we have is the ability to do this on an individual basis. We know with the motion capture how each individual person throws, and we know how each individual person’s tissues are, and we can work on an individual basis instead of trying to apply a one-size-fits-all solution. I think that’s the really exciting part.”

Curran worked with more than 25 pitchers from various teams, including some, like Voliva, who had undergone some type of surgery. The testing was conducted at Next Level Training Center in Greenville, Baseball Rebellion in Durham, and Diamond Xtreme in Greensboro.

For Voliva, the research is personal. He had Tommy John surgery to repair the UCL in his pitching elbow in 2017. He pitched in just four games in 2018, but fully recovered and made 32 appearances for the Pirates in 2019, recording a 5-4 record with four saves and an earned run average of 3.19. He struck out 49 batters.

The New York Yankees selected Voliva in the 18th round of the 2019 Major League Baseball draft.

Voliva believes the information Curran discovers in his research could be an important step for his career and for his health.

“I feel comfortable with the data, and whatever he finds out, I’m pretty comfortable with it and it will help make me better,” Voliva said. “It would be awesome to be able to take the next step after this.”

Read the original story to learn more and to see video of Curran’s research activity.

A Step in the Right Direction

Of course, professional athletes aren’t the only ones who benefit from UNC System research.

Most of us don’t appreciate the thousands of steps we take each day without stumbling or falling. Maybe we should. As more and more of us are getting up off our couches, even a casual stroll around the block could lead right to a doctor’s office.

“You’re within an inch of tripping every time you take a step,” said Associate Professor of Kinesiology Chris Rhea. “Yet, most of the time we don’t.”

Since completing his doctoral studies, which focused on how people use vision to navigate their environment, Rhea has looked for ways to help those whose walking is impaired due to injury or illness.

“We’ve been studying how we use vision to walk around in the world,” he said. “What if we can control someone’s vision and use that to control how they walk?”

Virtual reality technology – which has been getting more compact, cheaper, and more user friendly – is allowing Rhea to do just that.

When he joined UNCG in 2011, he started the Virtual Environment for Assessment and Rehabilitation Laboratory, or VEAR Lab. Since then, a string of projects, applications, and research by Rhea and his colleagues has begun to unlock the technology’s potential.

One application, which netted Rhea a patent in 2018, uses virtual reality – or VR – to retrain people who have trouble walking.

In the VEAR Lab, subjects – wearing goggle-like VR headsets or watching a video monitor – are told to match their steps to those of a virtual avatar as they walk on a treadmill.

“You’re just playing a game we all played in kindergarten – follow the leader,” Rhea said. But concealed within the avatar’s virtual steps are subtle cues designed to shift the patient’s movement.

“It’s the small hidden patterns that we embed in there,” he said, “that we think can build up a person’s adaptive capacity, lost due to injury, aging, or disease.”

Rhea’s new patent is for the technology that embeds these adaptive patterns into the software driving the digital avatar.

There are many ways VR could improve rehabilitation.

Rhea’s doctoral student Chanel LoJacono is currently working on a VR headset program to bring a virtual obstacle course to life at a patient’s location, rather than having a patient travel to a special facility. This could make cutting-edge therapies less expensive and more accessible.

In addition, with $1 million in funding from the U.S. Department of Defense, Rhea’s team has developed a smartphone-based device that can be strapped to someone’s thigh to precisely measure their balance, providing objective data to physical therapists and helping them measure a patient’s improvement over time.

The military wants the technology to help assess head trauma in people who have been exposed to explosions. But Rhea is also using it to assess the impact of a 12-week rehab program to improve balance in older adults – part of a National Institutes of Health study led by Kinesiology’s Dr. Louisa Raisbeck.

Just as Apple Watches can now alert their owners to some types of heart problems, Rhea foresees a day when personal technology could alert us to problems with our movement.

More broadly, Rhea imagines a time in the future when widely-available VR technology will allow patients to take advantage of guided physical therapy, on demand and from the comfort of their home.

“We’re a ways from this, but imagine if you could check out a VR rehab headset. You’re with a human therapist every Monday, but you get to take one of these home,” Rhea said. “I get to play a game, and the game is fun. The game gets harder as I get better.”

Every coach understands that building mental toughness is critical to building endurance and sharpening game strategy. It turns out, brain power might also play a critical role in healing injuries as well.

Research that Amelia Bruce ’19 conducted while she was a graduate student at Appalachian State University suggests ankle injuries can be better treated by targeting the brain. The results of this groundbreaking study have been published in the February issue of Medicine and Science in Sports and Exercise, the official journal of the American College of Sports Medicine.

Bruce earned an MS in exercise science from Appalachian and is currently pursuing her Ph.D. in kinesiology at the University of Virginia.

While at Appalachian, Bruce worked with Dr. Alan Needle, associate professor in the Beaver College of Health Sciences’ Department of Health and Exercise Science. Needle’s previous research had shown that people with ankle instability need more brain activation to do simple tasks. Bruce took the lead with the next step: testing the impact of brain stimulation in treating ligamentous injuries.

For her research, Bruce evaluated 26 study participants who underwent four weeks of ankle strengthening therapy. Half received an electrical current through their brain during sessions, while the other half received a placebo current.

Bruce found that strength training paired with the electrical current improved the way participants’ brains connected to the ankle muscles. This led to better balance, muscle activation, and perceived function.

This study was the first to show that treatments targeting the brain improve neural function in patients with injuries.

“This topic was of importance to me because injuries in ligaments happen every day. If this intervention worked, it could reshape how clinicians treat these types of injuries during the rehabilitation phase,” Bruce said. “While clinicians primarily treat the musculoskeletal side [during the rehabilitation phase], there is a whole neural system that is impacted by these injuries and needs just as much attention during treatment.”

When a sprain occurs in ankle ligaments, the brain directs the body to compensate by changing the patient’s gait, Bruce explained. This subconscious compensation causes a weakness in the ankle that leads to recurrent sprains over a patient’s lifetime — potentially leading to inactivity and related obesity, cardiovascular disease and other health problems.

“We want to nip that in the bud before it gets to that point by changing the way the brain reacts to the injury,” Bruce said.

Bruce plans to continue her research at the University of Virginia by testing patients with knee ligament injuries.

Read the original story to learn where Bruce has presented her findings.

Back On Our Feet, For Fun and Good Health

With the threat of COVID-19 still calling the game, this year the ballparks won’t be teeming with fans. Vendors won’t be barking up and down the stands selling peanuts and hotdogs. But our appetite for sport and leisure activities is voracious, nonetheless.

As hubs for cutting edge technologies and expertise, UNC System institutions harness their research capacity to help keep our star athletes on the diamond, on the gridiron, and on the court.

This same research also keeps the rest of us on our feet, moving for fun and for good health.