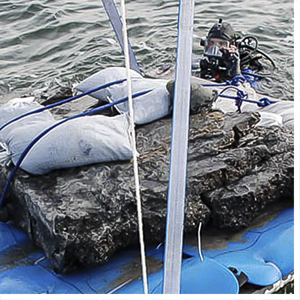 East Carolina University engineering students faced a daunting task. They had to come up with a way to flip a 1,600-pound piece of wood.

But this was no ordinary piece of wood. It is the stern post from the pirate Blackbeard’s ship, the Queen Anne’s Revenge (QAR), and it had been sitting on the bottom of the ocean for nearly 300 years.

“It is an extremely precious artifact for us,” said Kim Kenyon, QAR conservator with the N.C. Department of Natural and Cultural Resources at ECU’s West Research Campus outside Greenville.

The stern post that was pulled up from the wreck site in 2007 is one of the few intact wooden pieces from the ship. Kenyon said wood doesn’t do well in the warm waters off North Carolina’s coast where the ship’s wreckage was discovered in 1996. On top of that, the location of the wreck near the turbulent Beaufort Inlet as well as wood-boring teredo worms that live in the ocean likely caused more degradation to the piece.