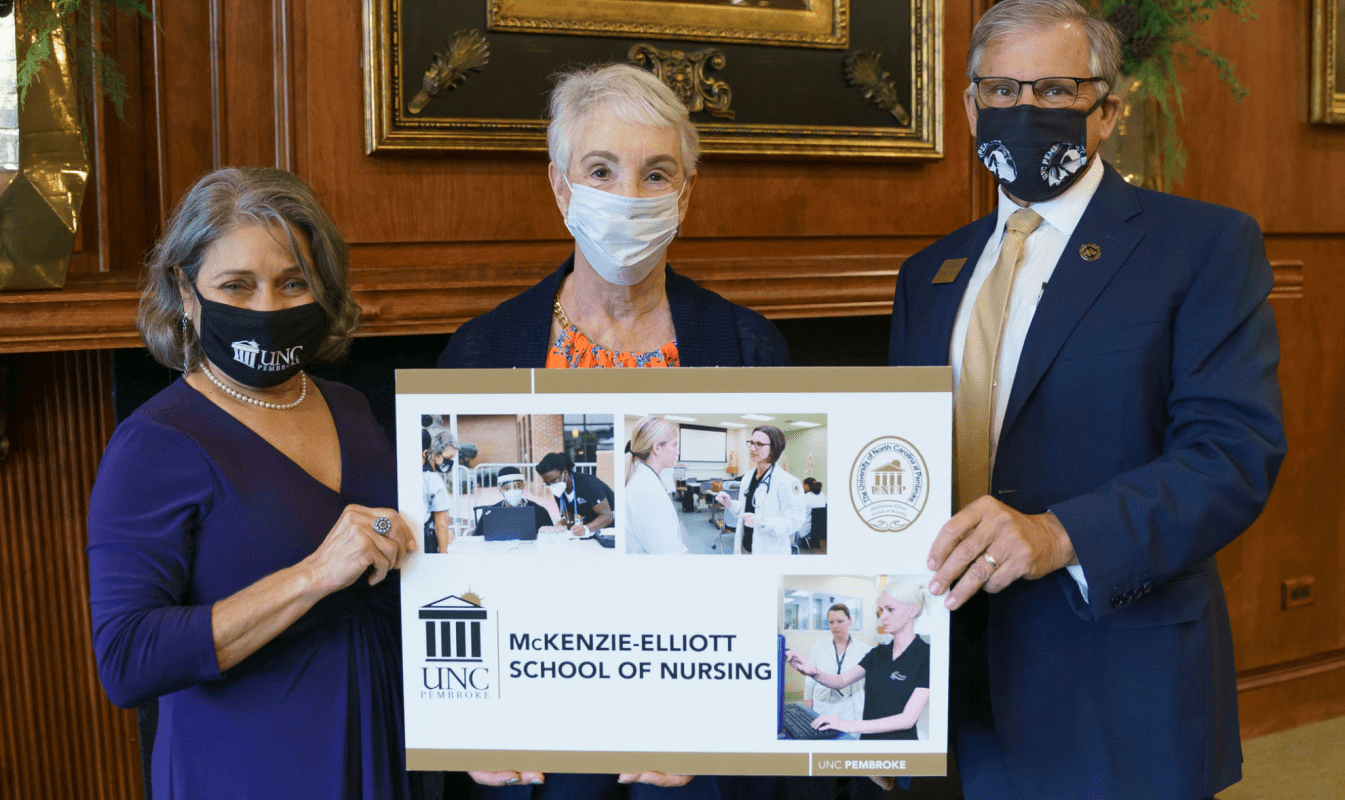 A new school is on the horizon at UNC Pembroke to honor Mary McKenzie Edwards, a strong mother and role model who overcame obstacles in the 1930s to become a registered nurse.

UNC Pembroke announced it has received a $6 million planned gift–the second largest in the university’s history–from former trustee Mary Ann Elliott to name the McKenzie-Elliot School of Nursing. The future new school will be established by transitioning the existing Department of Nursing into a School of Nursing within the College of Health Sciences.

Elliott, a native of our area and retired CEO of a global aerospace company, is making this estate gift to elevate the prominence of nursing education, attract further interest from prospective students and bolster faculty recruitment efforts.

The university’s Board of Trustees voted unanimously on April 16,  to approve the proposed establishment of the new school and naming.

“Mary Ann has long supported UNCP both philanthropically and through dedicated service,” said UNCP Chancellor Robin Gary Cummings. “Evidence of her generous contributions can be found across our campus, from the Mary Ann Elliott Business Career Center in the new School of Business building to the Entrepreneurship Hub and the College of Health Sciences. Her latest gift is yet another way she’s changing the lives of our students, changing our communities, our region, for generations to come.

“We’re fortunate to have someone like Mary Ann believe so strongly in the impact UNCP can have in southeastern North Carolina. On behalf of everyone at UNCP, I express our heartfelt appreciation for her leadership, generosity and unwavering support.”

Elliott, who resides in Virginia, has followed the rise of the university’s nursing program since it first began offering an RN-BSN program in 1992. Years later, a pre-licensure BSN option was introduced. Then in 2013, UNCP approved a Master of Science in Nursing (MSN) program.

“I’ve witnessed the growth of the university in terms of its impact on the community. The quality of standards has improved from when I first became involved with the university in the mid-1990s. There has been a steady progression from the administrative level, professors, the quality of students and overall physical growth of the university. When you witness improvements and milestones attained, one feels donated funds will encourage UNCP to keep moving forward,” Elliott said.

Elliott hopes her gift will also ultimately pave the way to offer a Doctor of Nursing Practice (DNP) degree. The DNP program was noted in the 2017 legislatively directed Health Study precipitating the 2018 establishment of the College of Health Sciences. The study indicated that establishing a DNP program would offer the region’s only source of primary care providers, creating an essential pipeline that will also bolster UNCP’s pool of potential faculty recruits who are doctorally prepared.

“My dream for the McKenzie-Elliott School of Nursing is it will not only improve healthcare outcomes in the surrounding area, but it will instill a desire for further education throughout the lives of students and those they serve,” she said.

“To see the nursing program expand its focus beyond the medical care provided to include educational programs and the importance of reading to their children is important to the growth in the county. It is only through education and health care that the county will prosper.”

The McKenzie-Elliott School of Nursing will honor Elliott’s mother, Mary McKenzie Edwards, who dedicated her life to the nursing profession after struggling financially to earn her degree during the Great Depression in Robeson County in the 1930s.

“My mother was a selfless individual who gave of herself to others. She conveyed many life lessons to me and was truly called to be a nurse. She overcame many obstacles to attend nursing school and become a registered nurse in the thirties. Her never-give-up attitude was instilled in me so thoroughly that it became a foundation for my later success,” she said.

After her mother’s passing in 1996, Elliott established a nursing scholarship at UNCP in her memory. Since then, she has expanded her philanthropic efforts, becoming one of the university’s top donors. She was among the private donors who helped establish UNCP’s Entrepreneurship Incubator, and in 2017, she donated $500,000 to the Thomas School of Business to create the Mary Ann Elliott Business Career Center.

In 1991, Elliott founded Arrowhead Global Solutions, a satellite communications firm, which, over the next 17 years, grew to a multi-million-dollar operation that played a critical role in supporting American troops deployed overseas. Through her work with Arrowhead and other firms, Elliott spent more than 30 years supporting America’s military, security and intelligence communities.

During her career, she was recognized as one of the nation’s top female satellite communications experts. In 2007, she became only the second woman inducted into the Space and Satellite Professionals International Hall of Fame, among many other awards. Two years later, she received an honorary Doctorate of Humane Letters from UNCP. Most recently, she served on the Board of Trustees at UNCP from 2017 to 2019.

Interim Provost Zoe Locklear believes transitioning to a School of Nursing will be instrumental in advancing the College of Health Sciences and the nursing program’s mission of improving regional health outcomes, workforce capacity and diversity challenges. Dr. Locklear added that this gift will enable the continued growth of nursing education at UNCP.

“This incredible news affirms the importance of our goal to producing tomorrow’s workforce,” said Locklear. “It will enable the McKenzie-Elliot School of Nursing and College of Health Sciences to advance their ability to provide accessible, seamless, high-quality undergraduate and graduate nursing education to diverse student populations. The future impact will be transformative.”

Department Chair and Anne R. Belk Endowed Professor Dr. Cherry Maynor Beasley said Elliott’s planned gift reflects a “vote of confidence” in the program’s success and provides an opportunity to increase innovation and the footprint in the nursing workforce.

“Since our beginning, the UNCP Department of Nursing has had two major commitments–to provide a highly competitive nursing workforce and to improve the quality of health care outcomes and nursing care in the region,” Dr. Beasley said.

“This gift will allow us to be more responsive to the ever-increasing need for nurses and be more innovative in scholarship, service and community engagement.”

Service and community engagement are the core of the mission of nursing education at UNCP, evidenced by the department’s front-line response to COVID-19. Throughout the global pandemic, nursing students and faculty have volunteered their time with innovative solutions, research and service in the community. From mobile clinics to distribute vaccines to serology antibody studies, nursing students and faculty have had first-hand experience addressing public health needs.

Kellie Blue, a UNCP alumna and UNC Board of Governors member, said Elliott’s generous donation affirms their recent work and will support the continuing growth of the College of Health Sciences programs that directly impact the health outcomes of our region.

“As we continue our fight against COVID, there has never been a better time to invest in and support health care education programs that have a proven impact on the communities they serve. The pandemic will only exacerbate existing health disparities in southeastern North Carolina for the next generation,” said Blue, who serves as Robeson County Manager.

“I am proud of the work of UNCP’s Department of Nursing and College of Health Sciences and look forward to the future impact this gift has the potential to create on our health and economy.”