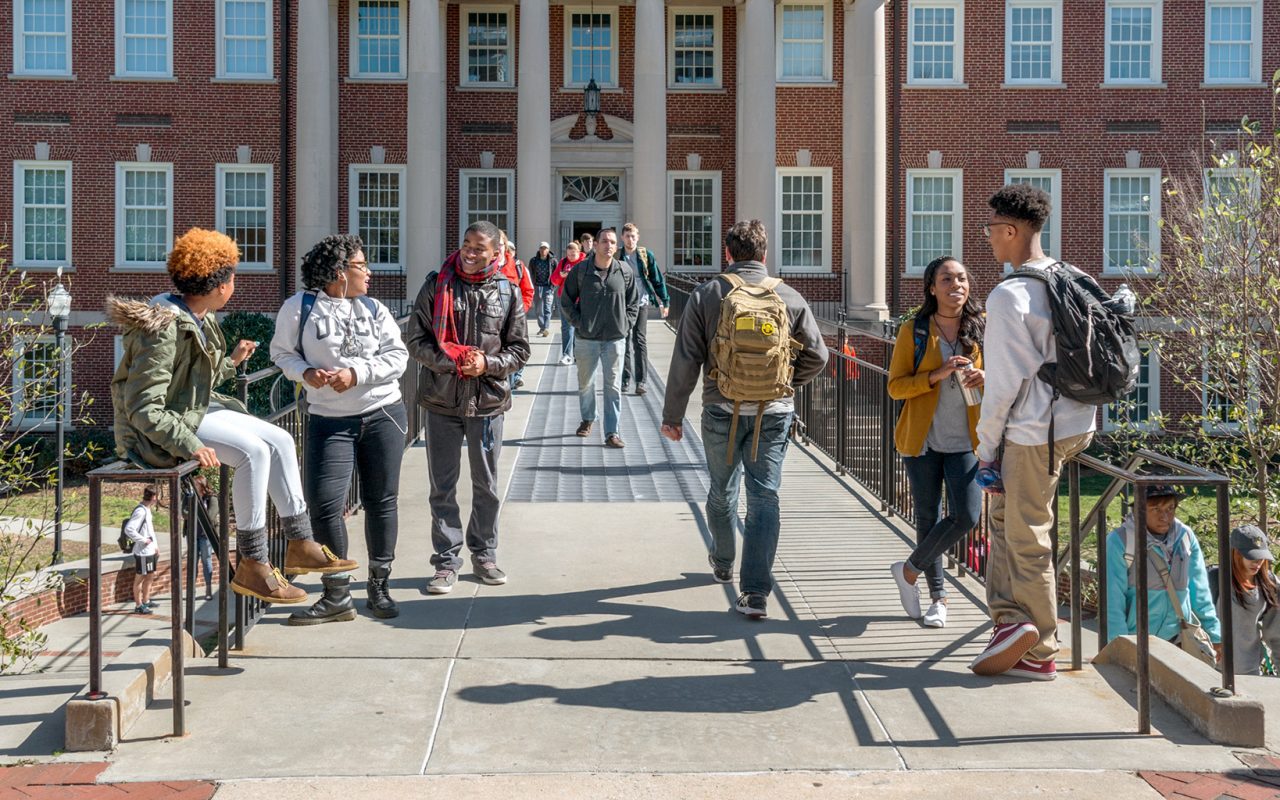 The Frontier Set, a partnership of 31 public and private colleges, universities, community colleges and university systems, was created by the Bill & Melinda Gates Foundation in 2016. It’s designed to fund programs that help colleges increase their number of graduates, particularly from groups that have lower graduation rates nationally, including minority, first-generation, low-income, and non-traditional students.

The program aligns closely with the UNC Board of Governors’ strategic plan, which counts student success as one of its five areas of focus. As defined in the plan, student success is measured by the timely acquisition of a degree and the development of competencies, such as critical thinking, lifelong learning, technological mastery, and resilience.

The 31 member institutions of The Frontier Set will focus on best-practice strategies designed to increase graduation rates, sharing data and working with other members to develop programs that yield measurable success.  Collaborative partnerships can be key and, as UNCG Provost Dana Dunn notes, there is promise for just such a collaboration with nearby Guilford Community College – also located in Greensboro.

The Frontier Set has three areas of focus: remedial learning, such as what institutions are doing to ensure students earn the correct college credits toward their degrees; college advising, especially helping students who have fallen off-track get back on track; and online learning, to help provide a more flexible learning environment for students.

FSU Provost and Vice Chancellor for Academic Affairs Jon Young said the university was one of the initial 13 members to join the Frontier Set.

“The Gates Foundation recognizes, like many people do around the country, that we need to help more adults earn college degrees,” he said. “The members of the Frontier Set have committed to increase our number of degrees awarded by one-third by 2022. That’s part of our own planning right now, to increase the number of degrees.”

Currently, FSU averages about 948 degrees awarded every year. Young said the goal is to reach about 1,270 in 2022, but that will not only mean increasing the percentage of students who earn a diploma, but also growing the student body.

As part of working with the Frontier Set, FSU aims to increase graduation rates among student populations with historically lower percentages of success.

“The Frontier Set recognizes that if we’re going to increase degree completion, it’s going to have to be among those populations that are currently not being served by higher education,” he said. “Two-thirds of our students are African-Americans, seven percent are Hispanic, 75 percent are low-income, and roughly half of our students are adult learners, and it’s exactly those populations that will have to increase degree completion if we’re going to make a difference for the whole country.”

FSU received a $1.2 million grant from the foundation, spread out over four years. Young said the funding will support a variety of purposes, including data collection – a very important aspect of the Frontier Set – as well as increased technology tools and faculty and staff support for development of best-practice policies.

UNCG is a very recent addition to the Frontier Set group of colleges, having joined in February. UNCG was chosen in large part because of its nationally recognized efforts to increase graduation rates among minority and low-income students. It was selected for the program by the American Association of State Colleges and Universities, one of several partner organizations that works with the Gates Foundation and which is providing UNCG’s grant.

“I think we were issued the invitation to apply because of our past record of effort and success in terms of closing the gap with students who are Pell Grant-eligible, or from underrepresented groups,” UNCG Provost Dunn noted. “Some years back, the Education Trust cites us for our success in closing the achievement gap, specifically the graduation rate gap between black and white students. That got a lot of attention and put us in the spotlight. More recently, the federal government issued a list of institutions that were doing good work and were well above average in graduating Pell-eligible students. We were one of 13 public universities on the list.”

UNCG will receive $640,000 over four years for new and scaled programs in specific areas, including summer bridge programs, technology improvements and an enhanced advising process. .
The summer bridge programs are designed to acclimate students to the rigors of college life. Students will take a “foundations of living”-type course and live on campus during the summer before their freshman year. A secondary program will support Hispanic and Latino students. Students and their families will participate in a three-day program on campus during the summer designed to help prepare them for a successful university experience.

The technology improvements will increase digital learning and online learning support to help academically at-risk students. This will include offering online tutorials, supplemental instruction and capturing lectures to make available to students as a supplemental learning resource outside the classroom.

As for the advising aspect, Dunn said it ties in directly with an initiative from the UNC System. UNCG will be adding a well-structured training system for advisors (both professional and faculty) to support at-risk and bridge students.

“We’ve got an advisor credentialing system that we’ve just put in place, where advisors will participate in various forms of training and receive credentials as a result of their doing so, and that will become part of their evaluation,” Dunn said.

Dunn said UNCG hopes to increase graduation rates by 1 percent each year at least, if not more, which she calls “an aggressive target we set at this point in time.”