Can Sweet Potatoes Save the World? 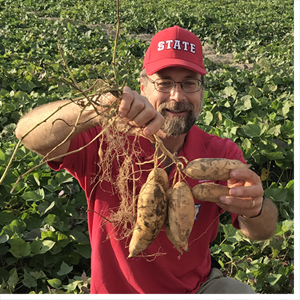 Some foods are known as seasonal wonders, making an appearance only once or twice a year when families gather for holiday feasts. Cranberry sauce, pecan pie, eggnog. Sweet potatoes, typically with tiny marshmallows roasted on top, were once on that list. But sweet potatoes are on the rise. They have become increasingly recognized as a superfood packed with essential vitamins and nutrients, and are now enjoyed throughout the year — in upscale restaurants, as a healthier alternative to French fries, and in products as varied as vodka, sausage and muffins.

Behind that rise is a remarkable success story with its roots at NC State, one that reaches into the familiar farms of eastern North Carolina and to the often forgotten corners of a handful of African nations. It is a story of science and salvation, of a pair of breeders who defied ridiculous odds to develop a new sweet potato variety that rescued the industry in North Carolina. It is also a story that holds out promise for the future, well beyond the shores of North Carolina and its acres of sweet potatoes. The work of a professor at NC State could transform the way sweet potatoes are eaten in several African countries, improving the health of young children and their mothers and creating new economic opportunities in Africa’s bustling cities and smallest villages.

Antonio Magnaghi is among those in Africa banking on sweet potatoes. He is well on his way to turning his small bakery on a crowded industrial street in downtown Nairobi, Kenya, into a thriving business that sells sweet potato muffins, fries and other products in the country’s top hotels, markets and coffee shops.