Art students provide service through their work, both at home and abroad 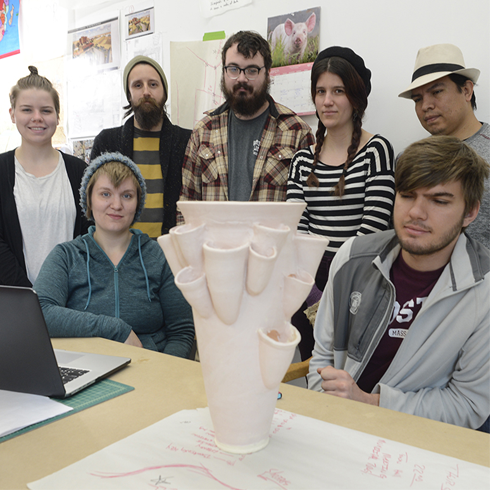 Prior to coming to Western Carolina University in 2015, Tom Ashcraft was a founding member of Workingman Collective, a group of artists and other professionals that take on projects who  explore the nature of collaboration and cooperation.

The Collective, which was created in 2005, was commissioned by the Art in Embassies program of the U.S. Department of State to create a piece of art for the new embassy in Monrovia, Liberia. The success of that project led to Art in Embassy being curious about working with the group again for a new embassy being built in Niamey, Niger. But the program has a rule of not commissioning the same group within a specified time frame.

Now WCU’s Distinguished Professor of Visual Arts at WCU and director of the MFA program, Ashcraft, who also still creates work with Workingman Collective, proposed the idea of creating a class called “Public Practice” where students would generate the idea of a project and would do post-research that involved thinking about what it means to make artwork in a public realm. That led to Ashcraft’s “Public Practice” class being commissioned to produce a work of art for the new embassy in Niger.

This is the third semester the class has been offered. It currently consists of six graduate and two undergraduate students. The final project, a 14- to 16-foot sculpture, will be installed in late 2019 or early 2020, Ashcraft said. The commission is $185,000, which Ashcraft said will be used to provide additional financial support for the School of Art and Design and cover project expenses and supplies, including his honorarium for overall project management responsibilities.