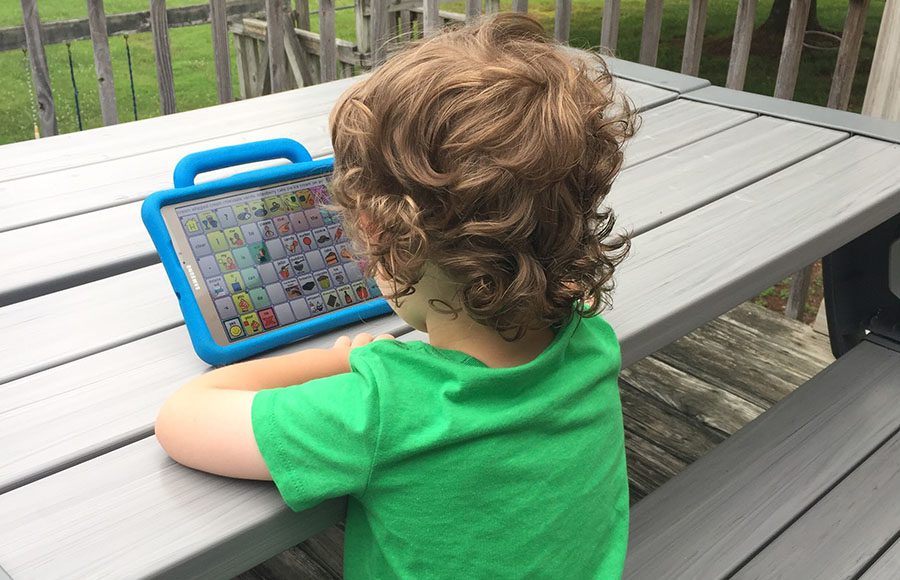 “How do you thank someone for giving your child his voice?” This question comes from the mother of a 3-year-old who is currently receiving speech therapy through Appalachian State University’s Thomas O. Eller Preschool Language Classroom (PLC) — a program of the Charles E. and Geneva S. Scott Scottish Rite Communication Disorders Clinic housed in the Beaver College of Health Sciences (BCHS).

The mother, whose name has been withheld by request, said she was encouraged by a family friend to contact Appalachian’s Communication Disorders Clinic after her son was diagnosed with severe childhood apraxia of speech (CAS).

CAS is defined by the Mayo Clinic as an uncommon speech disorder in which a child has difficulty making accurate movements when speaking. In CAS, the speech muscles aren’t weak; rather, the brain has difficulty directing or coordinating the movements.

“Until very recently, he didn’t have a word to call his mom. When he did learn to use a word to call her, it was ‘gaga.’ After much therapy and home practice with mom, he learned to say ‘mama,’ which brought his mother such joy during this time of stress, and the child now says it so well.”

PLC Director Sherry Street-Tobin, a speech-language pathologist who has worked with the child

Before attending PLC, the child had worked with several speech therapists but wasn’t making progress. He had a few approximations but no words that could be understood. Autism was also ruled out as a cause for his inability to speak.

Through PLC, the child works with Street-Tobin and PLC Clinical Educator Karalee Cole to receive intensive speech therapy, which comprises group therapy and individual therapy sessions delivered over a two-day period. The individual sessions focus on facilitating his spoken language and improving his intelligibility. These services were administered in the PLC classroom before the state’s March shelter-in-place order but have since been administered via Appalachian’s telehealth services.

Cole works with him three times per week to continue the apraxia therapy focusing on facilitating his spoken language, and Street-Tobin works with him once a week to support his use of a high-tech augmentative and alternative communication (AAC) device.

According to Street-Tobin, AAC refers to communication methods that are used to supplement spoken communication for people with speech or language impairments. “An AAC device can be any low-tech or high-tech means that helps deliver the communicative message. These can range from pictures to electronic devices in which the individual creates a message for the device to ‘speak,’” she explained.

With the use of his AAC device, the child can now make statements to his mother. “He refers to his device as his ‘talker’ and now he can tell me his wants and needs,” the mother said. “As a mom, that has meant the world to me!”

“The power of giving our clients a literal voice cannot be overstated,” BCHS Dean Marie Huff said. “We are extremely grateful to one of our generous donors, Mr. Tommy Eller, whose recent gift will be used to purchase a new AAC device that can be loaned out to additional clients in the future.”