Thomas C. Goolsby, of Wilmington, NC, was appointed by the North Carolina General Assembly in 2015 and reappointed in 2019 to serve on the Board of Governors of the University of North Carolina System. His term will end in 2023.

Goolsby serves on the Committee on Educational Planning, Policies, and Programs and is the vice chair of the Committee on Military and Veterans Affairs. He is an advocate for free or lower tuition in higher education and access to quality education for all students.

Goolsby is a trial attorney and a professor of law and was formerly an NC Senator. As the owner of Goolsby Law Firm, he has been practicing law in New Hanover County for the last 25 years. He previously served as a commissioner on both the North Carolina Crime Commission and the Courts Commission. After graduating from The Citadel, he served for four and a half years as an officer in the US Marine Corps and was called back into active service during the First Gulf War. He attended the historic "Siracusa Conference" held in Italy soon after the fall of the Soviet Union. As a delegate at the conference and a guest of the United Nations and the Council of Europe, he assisted in helping the former USSR and Central and Eastern European Republics in rewriting and reforming their criminal codes to include establishing the independence of the judiciary, the right to an impartial trial, and the establishment of the rule of law. Early in his legal career, he served as legal counsel to the North Carolina Governor's Crime Commission and worked on issues involving violent crime, prison reform, and the most intensive victimization survey ever done in the nation. He coordinated the international portion of the first Southeastern Regional Violent Crime Summit, sponsored by the US Department of Justice, which brought in criminal justice experts from around the world to assist the region in obtaining workable solutions to its growing epidemic of violent and property crimes. He also served as the legislative liaison and legal counsel to the Juvenile Law Study Commission, where he assisted in advising and lobbying the legislative branch on changes necessary to the juvenile code.

Goolsby served as an NC Senator from 2010-14, representing District 9. He sat on the Judiciary One Committee as co-chair and the Commerce, Finance, and State and Local Government Committees. He also served as the co-chair for the Justice and Public Safety Oversight and Appropriations subcommittee. He has carried his desire to serve the citizens of North Carolina into his role on the Board of Governors and works tirelessly to ensure that the UNC System is providing all the resources needed to attract students and help them graduate.

Goolsby is a graduate of The Citadel, where he was the Regimental Commander of the South Carolina Corps of Cadets. He earned an MBA from Golden Gate University and a juris doctor from the University of North Carolina at Chapel Hill. Born in Alabama and raised in Georgia, Goolsby and his wife have resided in North Carolina for the past 25 years. He has three children: Fleming, Lily, and Alabama.

"I advise students to take advantage of early college and programs that allow them to take college courses in high school. It's best to get a head start and get a taste for college. It is a way to save yourself time and money. Then when you get to college, make all of those moments count." 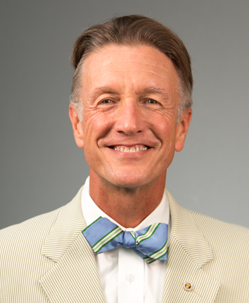